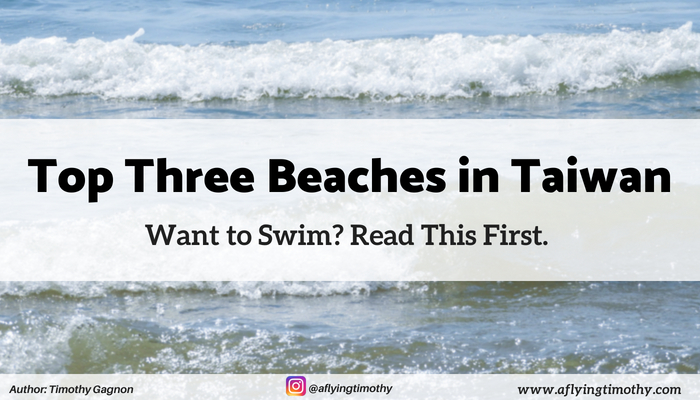 Most people who are not familiar with Taiwan assume it’s similar to Thailand or other tropical countries in South East Asia.

Sorry to burst your bubble, but Taiwan and Thailand are very different, almost polar opposites, actually.

In fact, most Taiwanese people actively avoid swimming or going outdoors, due to the heat and fear of getting dark skin. It doesn’t help that swimming is prohibited at most beaches in Taiwan.

It’s always fun to watch lifeguards blow their whistles at any foreigner who dares step foot into the water. People here mainly go to the beach to take pictures. Nobody tans, that’s insane. So if you’re looking forward to hitting a beach in Taiwan, don’t shoot the messenger.

Anyways, if you want to show off your gym progress, here are some beaches to check out.

Are Beaches in Taiwan Dangerous?

Actually, beaches here can be quite dangerous, a lot of people drown. There are strong undertows and other currents that can easily exhaust anyone. For this reason, most Taiwanese people avoiding swimming over their heads.

You might think it’s because most people don’t know how to swim, and that could be a factor, but there’s more to it. Random currents can suck you under, and even experienced swimmers fall victim. Generally, it’s best to stick to shallow areas. Boring – I know.

One more thing you should know:

I hate to say it, but the condition of most beaches in Taiwan is poor at best. Not much effort is put into their upkeep, and you’ll find trash scattered here and there; plastic bottles, straws, bags, etc. There’s a lot of driftwood left from typhoons too. Be careful where you step!

Not to mention the dead fish and other animals. Actually, it seems like the only time the beaches are cleaned is when random people volunteer to do so. It only seems to be getting worse too, which is a shame.

If a little bit of effort was put into their upkeep, most of the beaches in Taiwan can be turned into really nice tourist spots

But unfortunately, it is what it is.

Though there is not much beach culture, you can still find some beaches that can scratch the itch. Most of them are in the South of Taiwan, around a town called Ken Ting (and there’s also a party there every April, read about it here).

Of course, if you land in Taipei, it doesn’t make much sense to spend 3000 TWD + and 6 hours (or more) of traveling to find a suitable beach.

Traveling to Ken Tin and staying a night is actually more expensive than hopping on an airplane to a tropical island in the Philippines!

Luckily for you, there are a few beaches in Taipei for a quick day trip.

Here’s a list of the best beaches in Taipei:

The most popular by far is Bai Sha Wan, located in the North of Taipei, a 40-minute bus ride from Danshui MRT.

Bai Sha Wan is the most well-known, and it can be quite crowded on the weekends.

Just keep in mind, swimming is allowed here, but only in the designated swimming area, marked by roped buoys. Unfortunately, the swimming area is only in one corner of the beach, and it’s quite small.

If you dare stick a limb outside of the roped area, an army of whistle-wielding lifeguards will harass you.

Ever seen that clip of a water park swimming pool in China?

It’s kind of like that, except with slightly saltier water.

But if you sneak down to the other corner, you’ll be free to swim on your own, and lifeguards will generally leave you alone.

I guess if you drown over there, it’s not their problem. Most foreigners who have the itch to swim and chill on a beach will go to Bai Sha Wan.

A close contender is Fulong Beach. Fulong Beach is a 40-minute train ride away from Taipei Main Station. Keep in mind, this is the old train, or TRA, not the MRT.

Head north until you arrive at Fulong Station. From there, it’s a short walk to the beach. Unlike Bai Sha Wan, there is an entry fee for this beach, at least the main area.

The regular entry is 100 NT for each person. You would think if there’s an entry fee at least some of the money would go to cleaning the beach. But that doesn’t seem to be the case.

Actually, the only difference between the paid entry area and the free area, is the paid area has some sand sculptures. That’s it. Still lots of trash.

On the weekends, it can be packed as well. One thing about living in Taipei is you have to get used to the crowds. It tends to happen when you live in a city with the population of a small country.

Every tourist spot or nice area has tons of people visiting on any given day. To avoid the crowds, you’ll have to leave Taipei and head down South, where the population is much more sparse.

Anyways, Fulong beach is average, last time I was there I found a dead pig which was pretty cool. It has more restaurants and stores than Bai Sha Wan, and a small night market, so that’s a plus.

But the water is usually quite dirty.

Sha Lun is the closest beach to Taipei but it doesn’t really serve much of a purpose. It’s quite dangerous too, a lot of people drowned here, mostly students.

And swimming is strictly prohibited too. But if you want to see some water and feel some sand on your feet, this could be the place to do it.

Sha Lun is a 15-minute bus ride from Danshui MRT, any bus going to fisherman’s wharf will take you there.

It’s a nice place to tan and take some pictures of the ocean, but there’s not much you can do here. The beach is mainly used as a background for wedding pictures.

The good news is it’s more remote, so you can hang out without thousands of people staring at you.

Taiwan is a small country with a great transportation system. There are lots of places to visit for a quick day trip. Unfortunately, I don’t travel as much as I would like, but I when I do, I write about it here. One idea would be visiting Sun Moon Lake.

Those three are the best beaches in Taipei that you can check out for a quick day trip or two. Baishawan is probably the nicest, and there are some other ones in the North worth taking a look at. I recommend getting a scooter and driving further north until you find something worth checking out.

As I mentioned before, most Taiwanese people prefer to avoid beaches. In my opinion, if you’re really craving a beach atmosphere, consider flying over to the Philippines or a neighboring country. It costs the same as going to Ken Ting and the beaches are much nicer.

There are a lot of positive things about Taiwan, but unfortunately, the beaches are not one of them.

Have you been to any beaches in Taiwan? Leave a comment below.