Is Spring Scream in Taiwan worth it? Or is it a complete waste of money, time, and energy?

This article will make it easy for you to partake in one of Taiwan’s hottest parties (literally and figuratively!) with minimal injuries and accidents.

One of Taiwan’s biggest parties takes place every year during the beginning of April on the southernmost tip of Taiwan, a town called Kenting.

If you’re young and looking for some adventure or debauchery then Spring Scream is the perfect place to indulge.

Half of the population of Taipei and neighboring cities flock to Kenting for this three-day long party.

Table of Contents hide
Is Spring Scream Worth It?
Getting to Kenting:
Where is Zou-Ying?
Things to Know:
Parties Close Early
Very Crowded
What to Do in Kenting?
The Rundown:
The Beaches:
Getting Around:
Conclusion:

Is Spring Scream Worth It?

I’ll cut to the chase, as I’m older now, and partying for days straight doesn’t really interest me, I don’t think Spring Scream is worth it.

Another reason is the prices for hotels and everything is jacked up to three or four times the usual price, so it’s a challenge to find anywhere to stay.

Unless you want to be surrounded by millions of people, and be forced to spend a lot more money than usual, I do not recommend Spring Scream in Taiwan.

Kenting is a nice place to visit, but do it when there are fewer people.

But if you do go, I recommend bringing a camera that has a good zoom, like a Nikon Coolpix B700.

So you have been hitting the weights and want to show off that beach body, let’s get you to some beaches.

Assuming you live in Taipei, here’s how to get from Taipei to Kenting in the shortest amount of time possible.

Remember, this is Taiwan’s most popular party, so tickets get booked fast. You have to plan months in advance.

HSR is the fastest and most comfortable transportation available.

It’ll set you back 1,500NT (around $50 USD) each way but it’s worth it because you can avoid being trapped in a bus for 6 + hours, an experience that’s not recommended.

The HSR takes about two hours or so, but you will need to take a bus or share a taxi to the Kenting area.

The HSR leaves from Taipei Main Station. There are other stations but this one is the easiest to find, follow the signs, and soon you’ll find yourself on a bullet train headed to Zou-Ying Station.

Zou-Ying is a station close to Taiwan’s southernmost and second-largest city, Kaohsiung.

Speaking of the South of Taiwan, it’s a great place to record some action videos.

The foreigner population in this city is relatively small so if you feel like an endangered species… well, that’s probably accurate.

But this also means if you see other foreigners you’re headed in the right direction.

When you arrive in Zou-Ying the next step is to either take a bus or mini-van to your destination.

This step is pretty easy because as soon as you exit the station you’ll be harassed by drivers looking to ship more people over to the town.

If you take a mini-van (several people jam-packed into a van) then you shouldn’t have to pay more than 300 NT per person.

Cabs will be the most expensive but they’ll take just about as long as a mini-van.

I recommend taking a mini-van.

Assuming you booked a hotel, the mini-van driver will almost always be willing to deposit you in front of your hotel free of charge.

So you have arrived, deposited on the street with a pile of back-packs, congratulations.

Hopefully, you’ll make it back alive.

Do you like sandy-beaches? You can find some on Boracay or Palawan.

I have been to Sring Scream many times, and there are a few things you need to prepare for.

Back in the day, parties would go on all night, at every beach, and the lead to all kinds of craziness.

It was a lot of fun, for sure, but the amount of trash left behind was crazy.

I noticed this year there are not as many parties, and the streets seem to clear around 12 am, everyone, vanishes as if some curfew is in place.

Maybe I didn’t get the memo. And I don’t know where everyone goes. In some cases, there will be parties going on all night, but they’ll be on the outskirts.

This doesn’t mean the beaches close at 12 a.m.

It means the music stops and the security ushers people away from the beach, sometimes police are there too.

And they close the barriers, but you can always go under them.

It’s a bit of a buzz kill but you can always come back later when everyone is gone.

When you feel your lungs filling with pollution, that’s when you know you arrived.

There will be lots of people here. If you don’t like crowds… that’s too bad.

Usually, stores stockpile alcohol for this event, and you probably will always be able to find something to eat.

What to Do in Kenting?

If you came to the town for Spring Scream, then you’re probably in “Party Mode” and locating a cold alcoholic beverage is your primary objective.

There are plenty of convenient stores that’ll love to indulge in your alcoholic tendencies.

You might want to check into your hotel while you can still recognize letters and shapes.

Whip out that sunblock because you don’t want to be in this Sun for more than 10 minutes, trust me.

This sun will beat down on you without mercy!

It took me a grand total of 10 minutes to transform into an aviator-wearing tomato.

There’s one main street, and it runs directly through the town. This is where all the action takes place.

Get familiar with this street because it’ll be your home for the next few days.

The street is littered with a wide variety of shops, street food, bars, and questionable establishments.

During the peek of the weekend, this street is absolutely crowded and a traffic jam runs through the entire town.

There are a lot of restaurants on the street, so if you’re hungry I suggest start walking on this street and see if you can find some food.

Or you can check Google Maps for a more accurate suggestion before you accidentally walk back to Taipei. 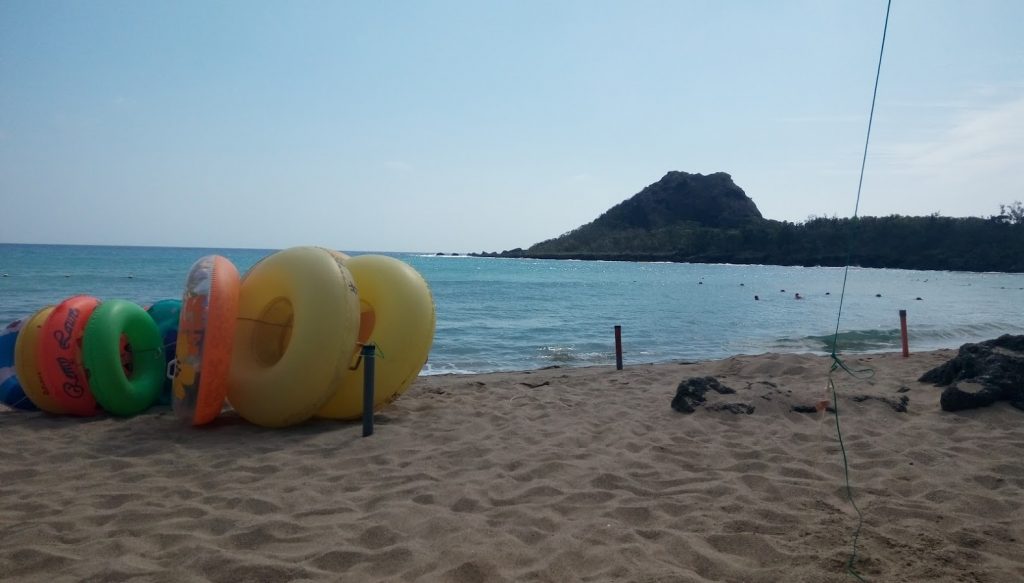 There are three main beaches in Kenting: Chateau and Howard’s Hotel Beach.

These two beaches are the nicest and I didn’t bother with the Chinese names because everyone calls them by their English names, or more accurately by the hotels closest to them.

Chateau is the biggest beach, stretching northwards for a few kilometers, it’s really nice, but it’s technically the property of Chateau Hotel.

That means the chairs, sun-beds, and hammocks are not for you (unless you stay at the hotel).

But that doesn’t mean you can’t enjoy a few minutes of relaxation until hotel staff tell you to GTFO.

This is the main beach where the main party, Spring Break on The Beach is located.

This party is the most popular party during this weekend and most people will be here,  a three-day-long event that starts Friday night and ends Sunday night, shutting down each night at 12 a.m.

It’s definitely a lot of fun and I recommend buying 3 days pass tickets in advance. 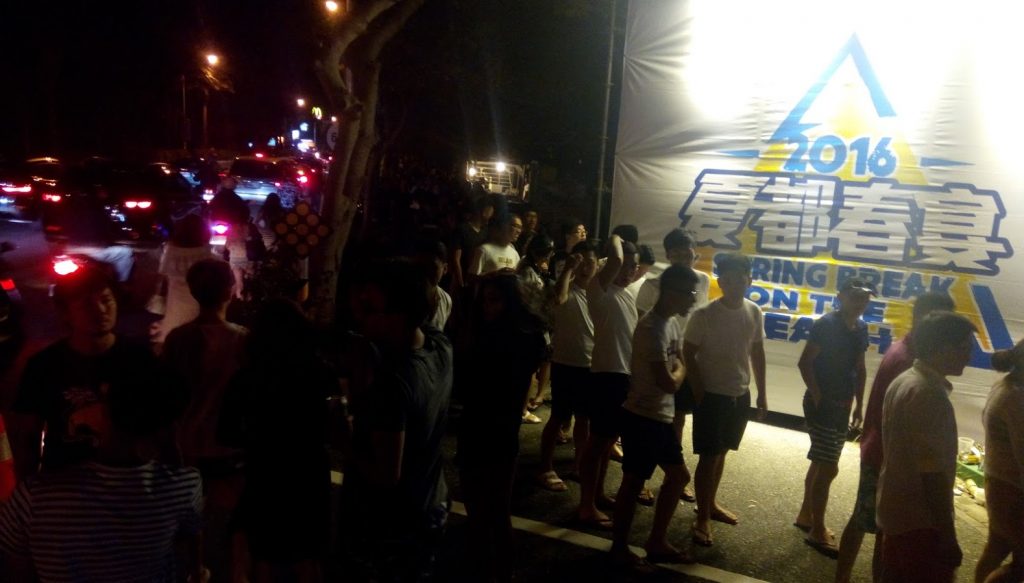 The other beach has a party too, but it’s not a major event, not so many people go to this one.

But it’s free, and you can bring drinks to the beach!

Well, relax as much as you can with jet engines blasting popular songs into your ears.

During the daytime it’s quiet, the DJs only start around 8 PM.

I spent more time on this beach because it was closer to my hotel.

These are the two beaches where you’ll likely spend most of your time.

If you’re lucky, the water will be calm and clean.

If you’re not lucky it’ll be choppy and full of jelly-fish, I experienced both (the jelly-fish are not recommended).

To explore the area, renting scooters is an option but prices will be jacked up during this weekend because it’s the town’s busiest week.

Still, a scooter can be rented for about 500-800 for a day, it’s not a total deal-breaker, and it’ll make it easier for you to explore the area.

There are some shops that will let you rent scooters without one, they might be hard to find though.

One notable attraction is the natural gas fire pit.

Keep in mind, Taiwan is a volcanic island, and the entire southern coast is covered in razor-sharp volcanic rocks.

The natural gas emitted from the rocks creates a cool fire pit that’s worth a peak during the nights. 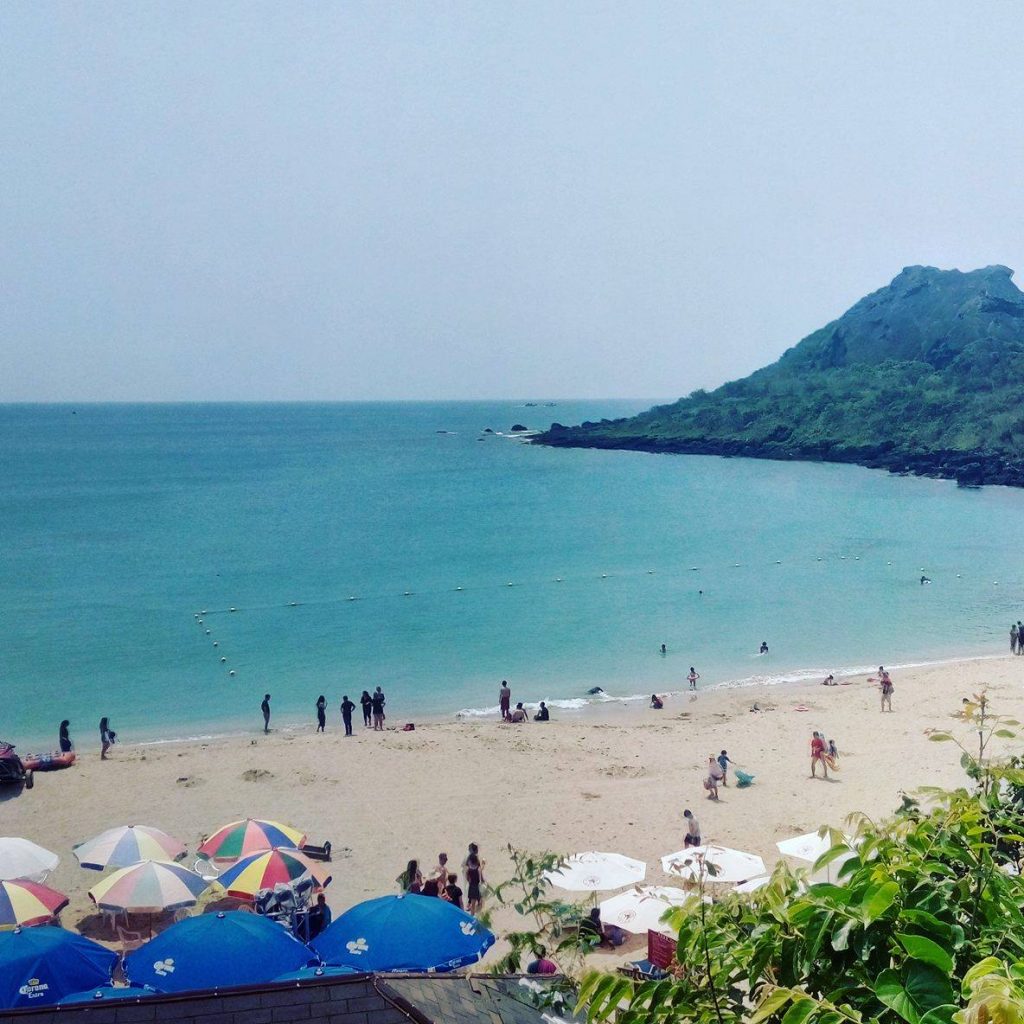 You can also go scuba-diving and there are plenty of water-sports available.

Basically, there’s always something to do, and if you don’t do want to do anything – that’s fine too!

I had the most fun just driving down the coast in the morning and checking out the different beaches and just exploring!

It’s also not unusual to spot monkeys on the road, but I heard that they can be a bit aggressive and dangerous so keep your distance.

Wild monkeys are not cool.

So, if you come to Taiwan, and you hear your friends talking about something called Spring Scream festival, now you know what they’re talking about.

In my opinion, Spring Scream in Taiwan is not worth it, anymore. It’s too expensive, and the parties aren’t even that special.

But if you have money and want to be a bit crazy, then go ahead. I’m sure you’ll have fun.

Keep in mind, Spring Scream festival is not as popular as it used to be, and the popularity is dying with each year too.

If partying is not your style and you prefer more recreational activities, head to Kenting any time besides the beginning of April.

Spring Scream in Taiwan is a lot of fun but it can be a bit wild, so make sure to make proper preparations in advance, unless you want to end up with extreme sleep deprivation.

Just keep in mind the town doesn’t get a lot of tourists.

You might find that most shops, and restaurants, are closed during off-season dates, like a ghost town.

It’s still a nice place to visit with your friends if you have some time to kill.

And the drunk people.

Like this article? Check out my trip to Okinawa, Japan!