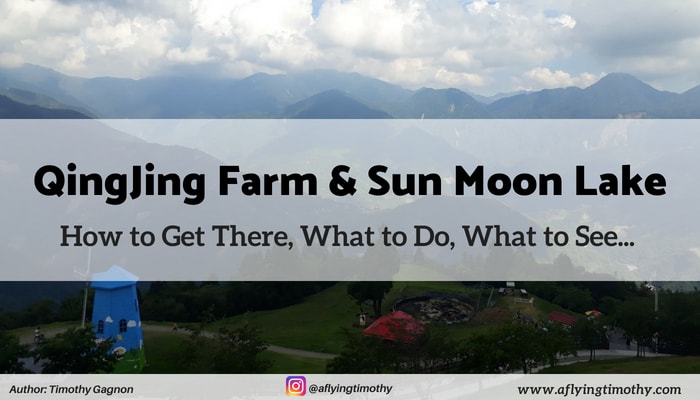 When you live in Taipei, the sardine-packed buildings and crowds often make you feel claustrophobic, and you need an escape.

Luckily, thanks to Taiwan’s transportation system, escaping the concrete jungle is rather easy. There are plenty of places you can go for a quick weekend getaway.

In my case, I decided to head to Sun Moon Lake and Qin Jing Farm. I stayed at a hotel in Sun Moon Lake for one night, and another night at the farm, two nights.

It was a really cool trip! And not only can you learn a lot about Taiwan’s aboriginal culture but also get your dose of nature and oxygen.

So if you’re feeling trapped and suffocated in Taipei, maybe this trip is for you.

Jump to the information you need:

Let’s start with the basics:

Consider bringing a NIKON B700 to zoom in on wildlife!

What is Sun Moon Lake?

Sun Moon Lake is one of Taiwan’s hottest tourist attractions. It’s Taiwan’s largest lake in the Yuchi Township, Nantou Country, near the center of Taiwan. It attracts thousands of foreigners, mainly mainland Chinese. Getting to Sun Moon Lake from Taichung is the easiest but there are direct bus routes from most cities.

Sun Moon Lake is one of my favorite places outside of Taipei.

Can You Swim at Sun Moon Lake?

Unfortunately, swimming is not allowed at Sun Moon Lake. However, there’s a mass swim session, where people compete to cross the lake. It’s a nation-wide event, and as you can imagine, there are lots of people. I wouldn’t recommend it. Even though swimming at Sun Moon Lake is prohibited, some people still secretly jump in. It’s not like the lake is lava.

Getting to Sun Moon Lake from Taipei:

We got a bus from Taipei Main Station. You can walk around the ticketing booths until you see a sign for Sun Moon Lake, it’s usually in English.

There are a couple of different buses, but we chose King bus 國光客運 because it’s the fastest and most trustworthy.

Just keep in mind, the lake is in the center of Taiwan, so it takes a few hours to get there. You’ll want to go to Sun Moon Lake first because it’s easier to get too.

I recommend staying at the lake for a night or two, so you have some time to look around. To get to the farm from the lake, there’s a shuttle bus service you can book on KK Day here. If you book a hotel near the farm, they can drop you off there too.

The bus will deposit you at the main terminal, where you’ll immediately be harassed by ferry ticket sellers.

There are plenty of hotels around Sun Moon Lake, it’s quite easy to find a decent place to stay. I recommend booking online.

We stayed at a hotel called Ace House in Yi Da Shao, an aboriginal tribe along the coast of the lake. The hotel was pretty nice, but because we were the only guests there, it was a little creepy.

Here’s the location on Google Maps:

It was a newly renovated nice open concept. But not much of a view. More of a budget-stay. There are fancy five-star hotels too. Breakfast is included.

We booked the shuttle mentioned earlier, and they dropped us off at our hotel. Keep in mind, the farm is pretty high in the mountains, and there’s only one curvy road going there.

When we went, it wasn’t cold.

The hotel we stayed at for a night in Qing Jing farm was like a massive castle, called Shangrila Resort.

Overall, I was quite happy with the hotel, you get some really nice views of the mountains. 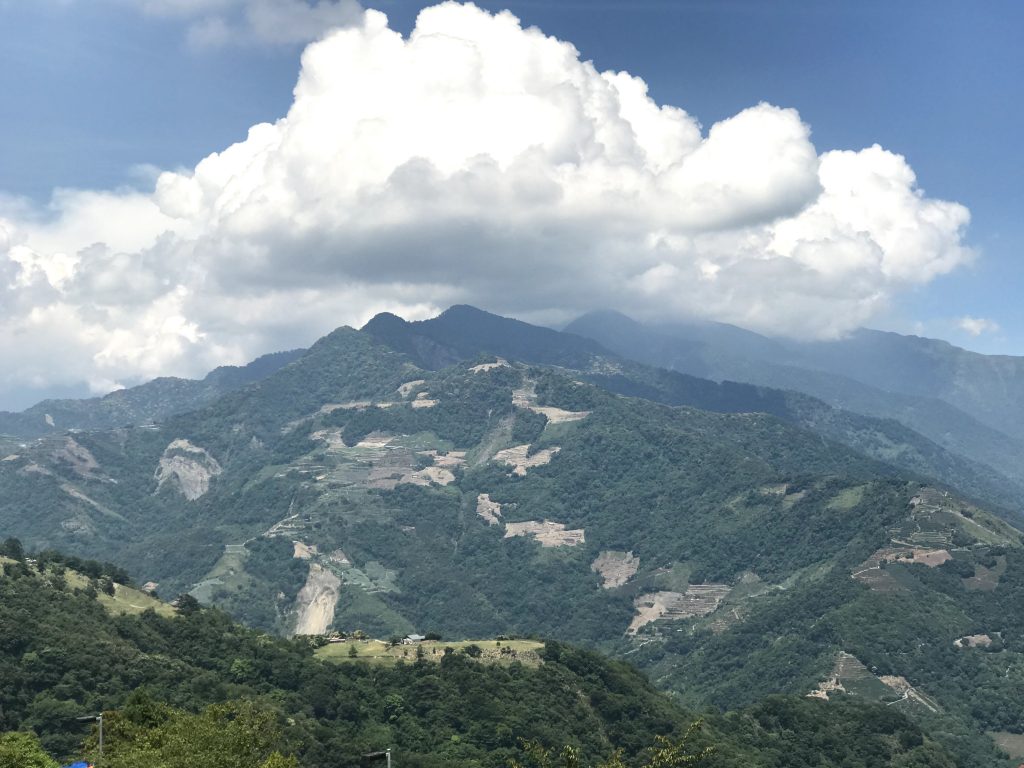 It resembles a super-size cabin, with a ton of rooms inside.

We stayed in a room on the fourth floor. 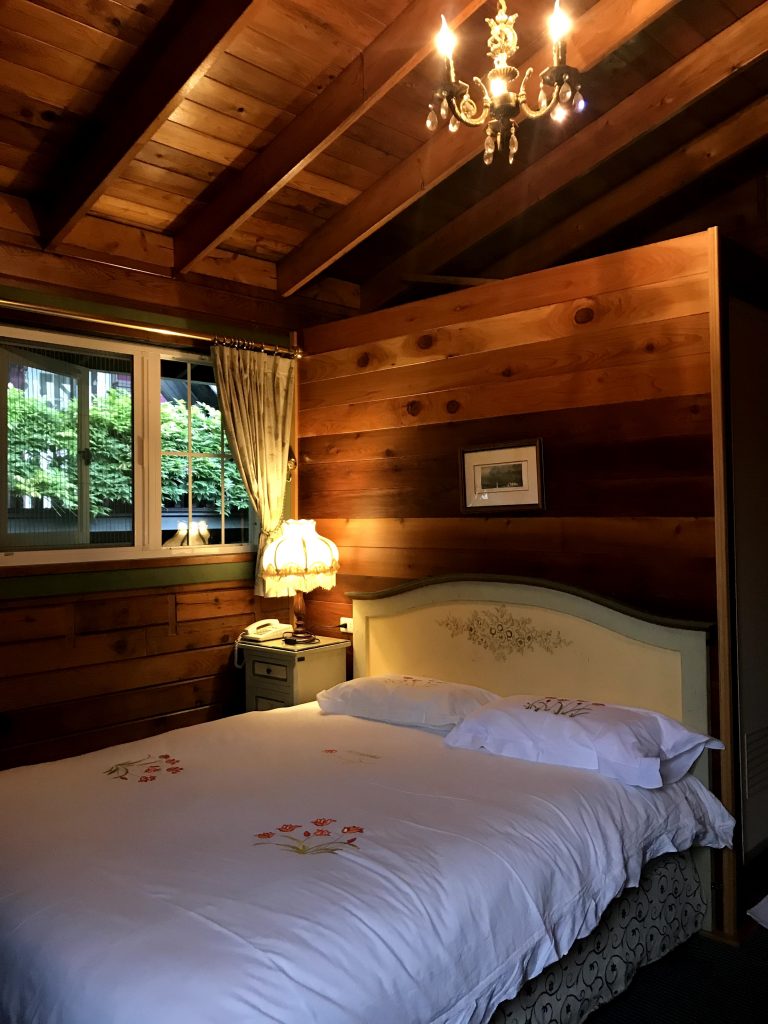 It’s a short walk from a small tourist area that has coffee shops, a 711, Swiss Garden, and a few restaurants.

Swiss-Garden is a well-maintained garden with a pond, a bunch of flowers, and a little drink store.

You have to pay to enter.

But let’s get back to Sun Moon Lake…

Getting Around Sun Moon Lake:

Ferries ship people to different locations around the lake, it’s the fastest way to get around.

A public bus goes around the entire lake, in circles, but it takes a lot longer (though it is much cheaper).

There are a few different towns along the coast of the lake that you can take a ferry to. Thankfully Google Maps actually has all the ferry information.

Just buy a ticket from any of the booths, we bought a ticket for three stops, like a mini-tour.

The first stop is a little island that has a temple and famous tea eggs: 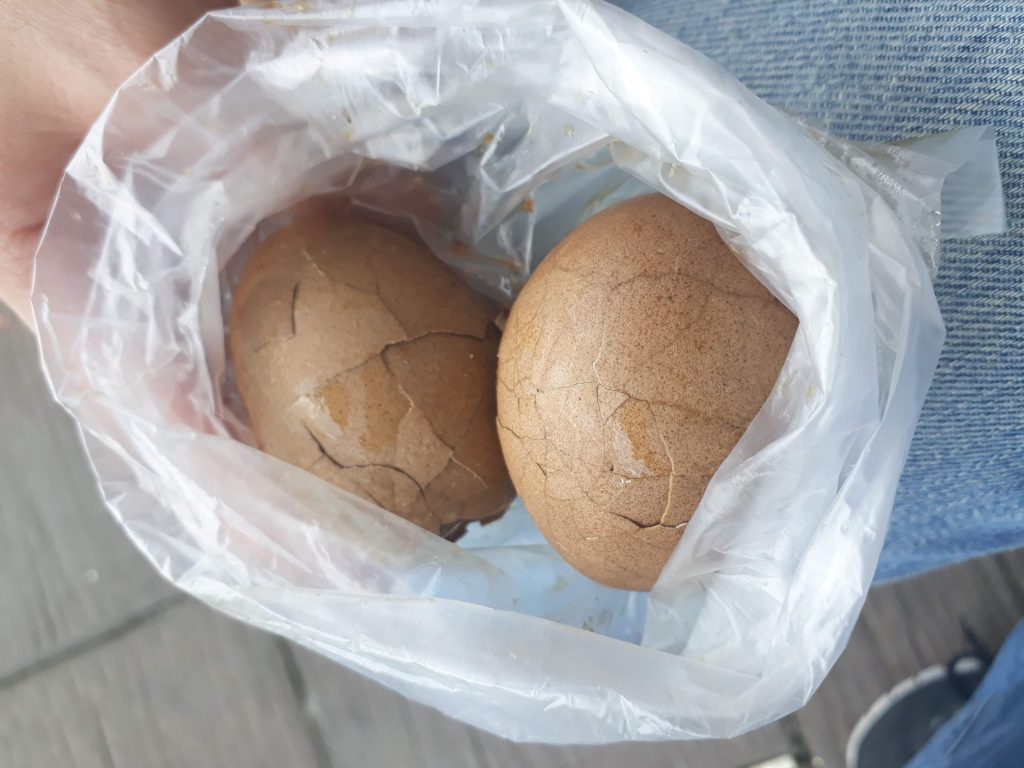 According to the tour information, the tea egg seller has been working on that island, selling the eggs, for over 80 years.

So you pretty much have to buy some.

This particular island doesn’t have much to do, besides, take pictures of the view, and relax a bit. 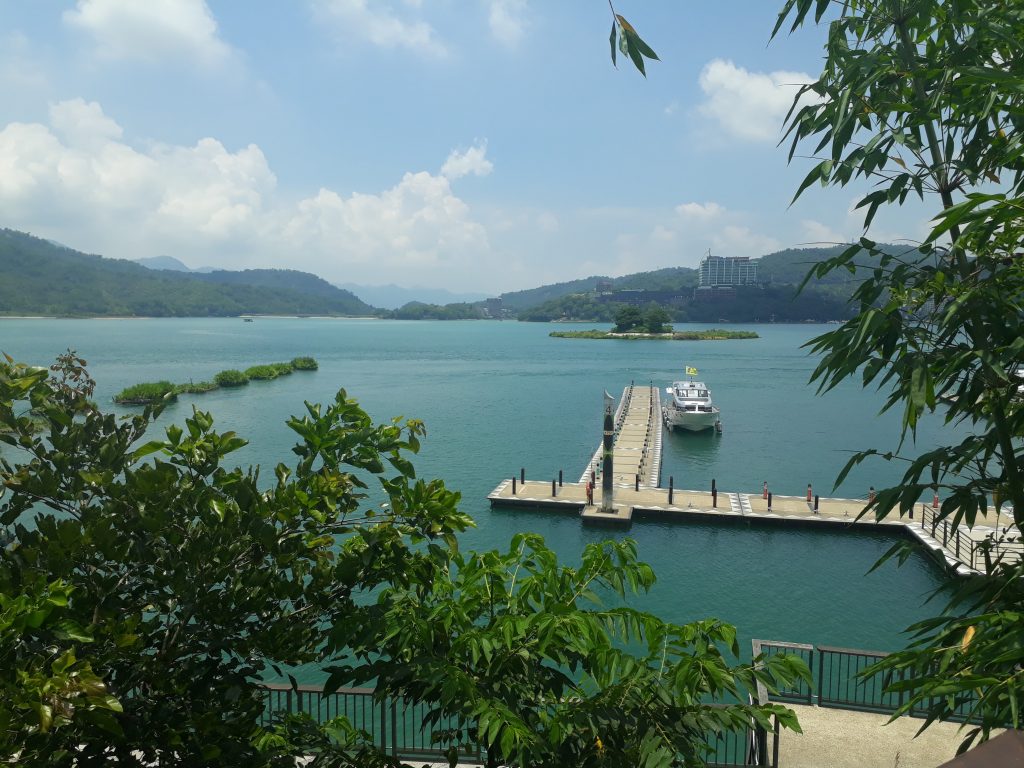 You can get some pretty nice views from this island.

The next stop is an aboriginal tribe called Yi Da Shao, where you can find restaurants, street vendors, and the same stuff you can find in most night-markets in Taiwan.

Hungry? You’ll find plenty of street vendors selling all kinds of food. But one of the more popular restaurants is located in Yi Da Shao.

The reason it’s popular is that the chef used to cook for the Taiwanese president. Another reason is the traditional sticky-rice stuffed spicy chicken wings: 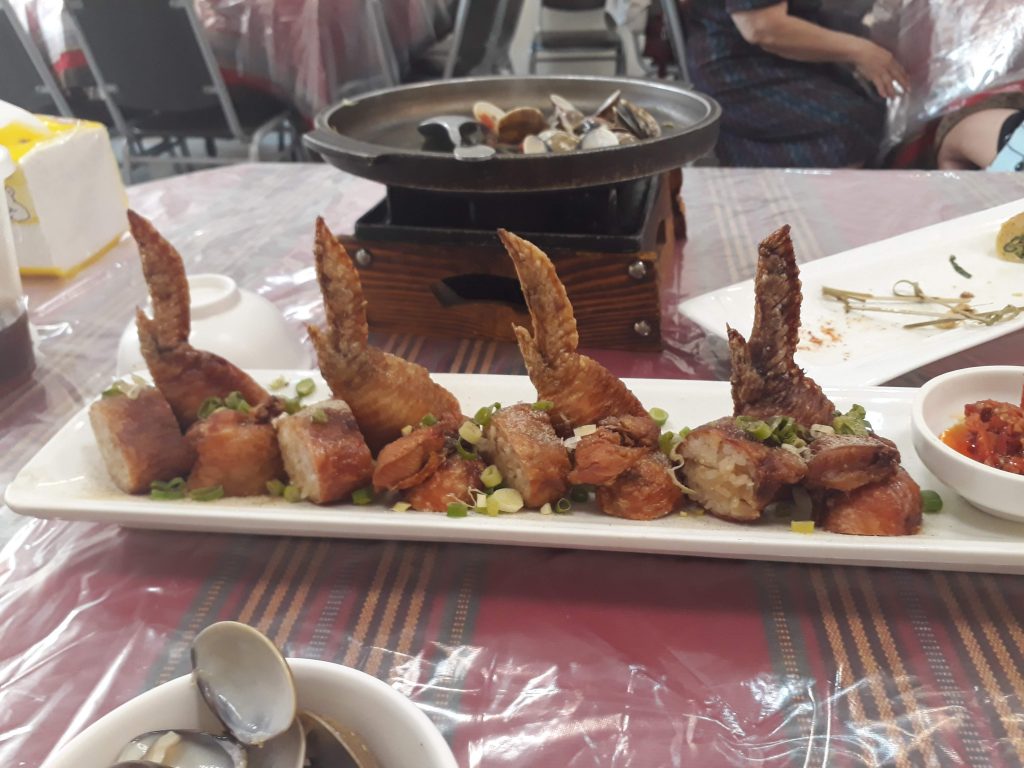 The chicken wings were not bad, but the skin was a little tough. Chicken butts are included too.

Of course, there are plenty of other dishes you can try too, we got a hot plate of clams and an aboriginal omelet. Another thing this area is famous for is tea.

You can find all sorts of mountain tea, for a fraction of the price in Taipei. One is called Sun Moon Lake black tea, and it’s really quite tasty.

When it comes to eating at the lake, it’s a matter of walking around the streets to find something that appeals to you.

There are plenty of options. On the farm, things are a little different.

Since the farm is up in the mountains, there aren’t many restaurants.

You can find a few hole-in-the-wall restaurants here and there. Thankfully, Shangrila Resort includes a free dinner, which was quite fancy and delicious.

The dinner consists of four courses with the main dish, and you have to pick the main dish when you check-in.

It seems like people come to this hotel just for dinner. 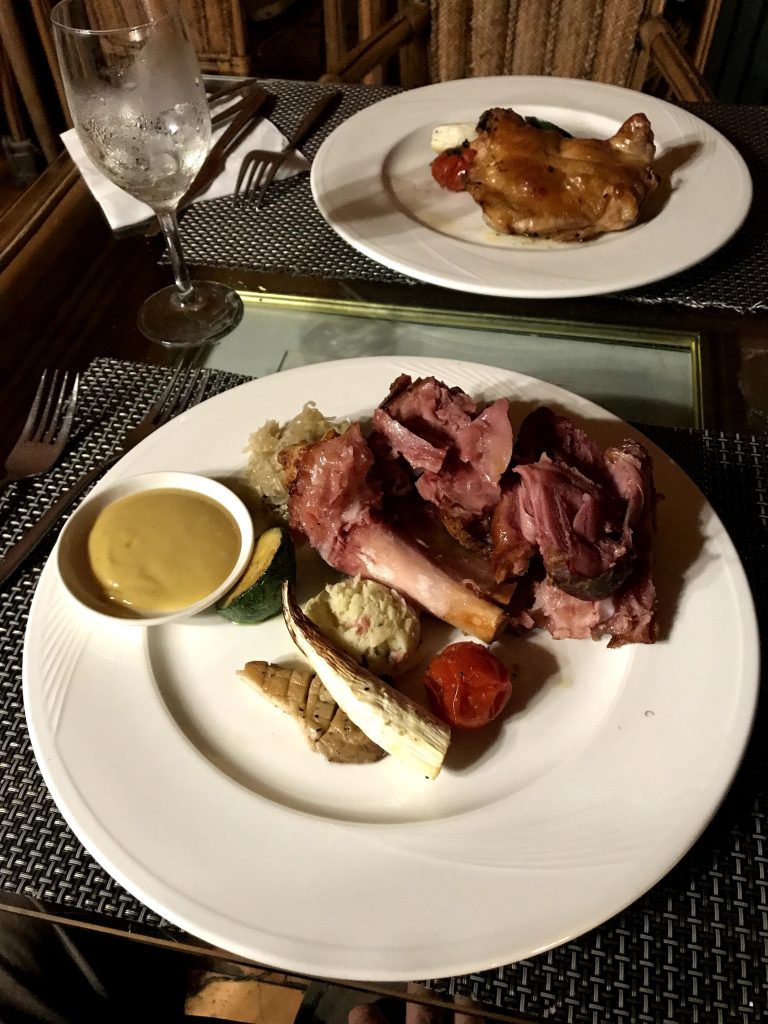 So if you stay at Shangrila Resort you don’t need to worry about finding food, they have plenty of it.

Other than that, there’s a 711 about a 10-minute walk away, where you can find more snacks and alcohol.

The entire area around Sun Moon Lake is aborigine territory, and each town belongs to a different tribe.

As legend has it, the aborigines discovered Sun Moon Lake when chasing a white deer through the forest.

After discovering the resource-rich lake, they relocated their tribe there.

Like Okinawa, the area has a particular statue that governs the land; 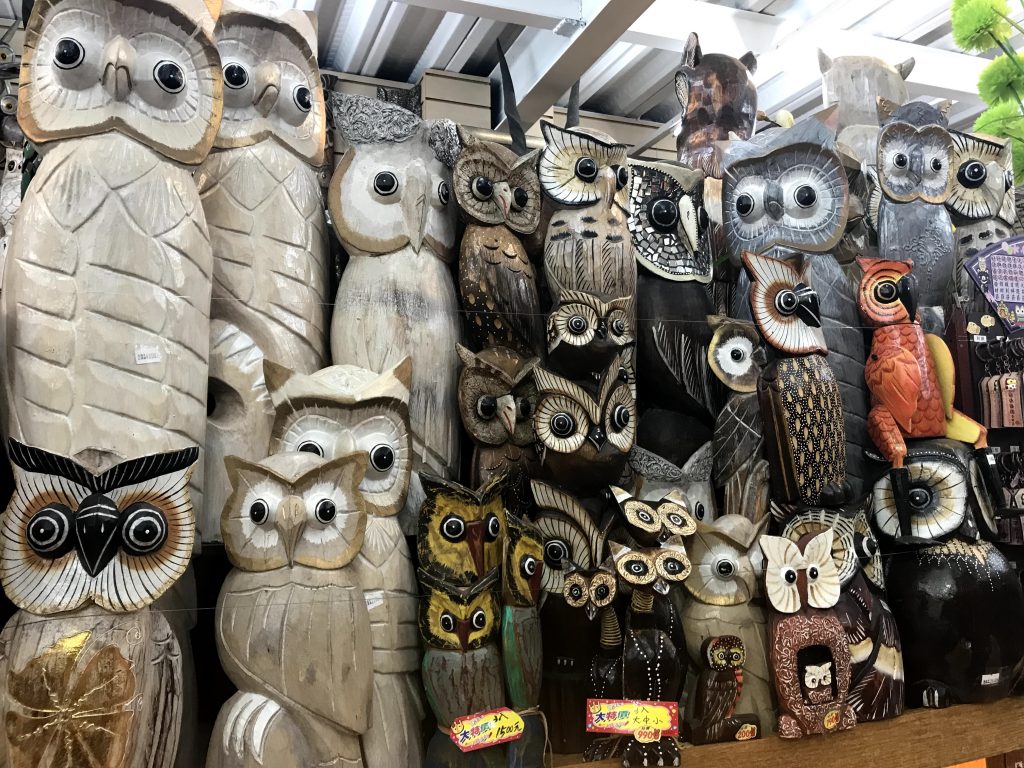 You’ll see owl statues all over the place, it’s a sacred animal, according to the Thao aborigines.

The story behind the owl is interesting too:

According to the legend, a Thao girl got pregnant out of wedlock, and the tribe couldn’t forgive her.

So she escaped into the mountain, only to be found dead a few days later.

When they found her body, there was an owl on a branch above her, which lead the people to believe her spirit remained in the owl.

Since then, whenever a woman was pregnant in the tribe, an owl could be seen flying over her house.

Many years later, the owl is still the symbol of the area.

Most of the street vendors sell owl carvings and other owl-related products.

They often call these owls “Lucky Owls” because they come from Sun Moon Lake.

Most of the hotels in the area will be happy to drop you off at the actual farm.

It’s more like a grassland where they let sheep roam freely and graze.

The farm is famous for its sheep! When we went, there was one sheep out, surrounded by a crowd of selfie stick-wielding tourists.

Just minding his own business and casually munching on grass while millions of people snap pictures.

Reminded me a bit of my girlfriend on our trip to Okinawa, casually eating cake in the pouring rain.

When I looked at our pictures of the farm, later on, I realized there were a lot of sheep out, but they were all hiding in a corner of the area.

I mean, if I was a sheep, I would do that too. Overall, the place is quite nice, lots of grass, and a great view of the surrounding mountains.

You can also stop by the sheep-themed store for some goat milk ice-cream. I also noticed some horses, and I assume you can ride them, for a price.

Unfortunately, it started raining so we had to take cover.

At some point, you’ll find a sign Qing Jing Skywalk.

The Sky Walk is a man-made structure that wraps around the park and forest.

If you enter the Sky Walk near the farm and follow it down, eventually it will lead you back to the 711 area, and Shangrila Resort.

Unfortunately, we didn’t take this path. We took the scenic route, through the mountain park, which was nicer because there were fewer people.

And I also had my first experience with a wild Taiwanese monkey!

But I wasn’t able to get a picture because it was deep in the jungle.

On the other hand, I did find this cute guy, who was quite obsessed with me:

He followed us for quite some time, before losing interest. When we reached the Sky Walk, it was actually the exit, but we decided to go in from there anyways and walk uphill.

Of course, after about 10 minutes, we promptly gave up and turned back, heading to our hotel to collapse from exhaustion.

Overall the farm and the nearby park are really nice places to relax.

Getting Back to Taipei:

All good things must come to an end. And now you begin the adventure of finding your way back to Taipei (or wherever you live).

Thankfully, there is are somewhat regular buses that will take you to Nantou, Puli Station.

You can check Google Maps for more information. From that bus station, you can buy a ticket to Taipei, we recommend the same company mentioned at the beginning of the article.

They should leave every thirty minutes or so. Hop on one, and you’ll be back in Taipei before you know it.

And then it’s time to start the regular grind again.

So, overall, if you’re looking for a weekend getaway, either with a group of friends or on your own, checking out Sun Moon Lake and the farm is worth a shot.

Yes, it’s worth it. We enjoyed our time quite a lot, and we plan to go back sometime soon. The only annoyance was the public transportation system. It can be a bit tricky figuring out bus routes.

If you have any questions, leave them below, and I’ll do my best to answer them.