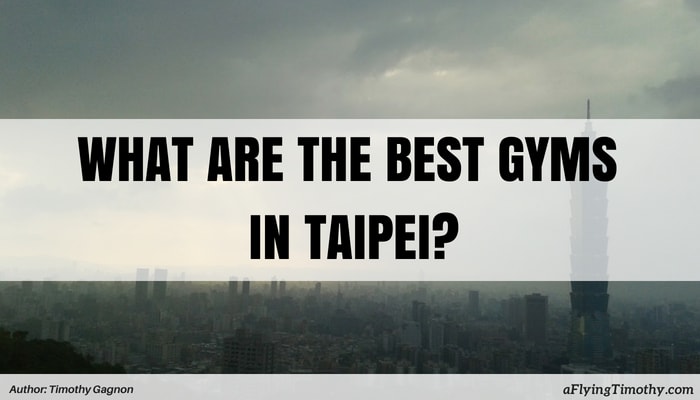 So you’ve arrived in Taipei and you’re wondering where to go from a good workout. Looking for the best gym in Taipei?

I tried a ton of gyms in Taipei, and I figured there wasn’t much information about them online, so hopefully, this article will fill the void.

Whether you’re planning to come to Taipei and need somewhere to work-out, or if you need to switch gyms for some reason, this article is for you.

It’s that time of the year again. Time to hit the gym and start building a physique that doesn’t make people look away in shame.

Whether you’re visiting Kenting for Spring Scream, Palawan, checking out Taipei’s beaches, or simply trying to stay healthy, then you’ll need a good place to workout.

Continue reading to discover what is the best gym in Taipei.

Couple of things to keep in mind…

To start off, Taipei is has a population of 2.7 million people.

That’s a lot of freakin’ people.

In fact, Taiwan is the 17th most densely populated country in the world.

And when everyone gets off work at the same time…

Working out in a crowded gym is possible, but you’ll have to either wait for people to finish using the equipment or ask to work in.

If you ask, usually they’ll let you, but you’ll get some stares from all the other people who were waiting for that one person to finish.

Even if you do work in, there’s usually a line to use the equipment. I remember once waiting in a line of like 6 people to do one set on bench press.

There’s not really much that you can do about that. Taipei will always be crowded. Just remember, the peak times are between 6 – 9 PM.

Tip: Take a look at the Google Maps listings for peak times.

Are Gyms in Taipei Foreigner Friendly?

So you’re fresh off the airplane and you don’t have an alien resident card (ARC) yet.

The commercial gyms are not very foreigner-friendly, but every cash-based gym will let you enter with absolutely no problems. Just hand over the cash, and you’re good to go. It’s the same with the sports-centers.

Most commercial gyms require a minimum one year contract. To do that, you’ll need an ARC card and a payment method.

Besides, if you’re not planning to stay a year, it won’t be worth it. There are steep fees for breaking the contract.

We’ll talk more about getting a gym contract at a commercial gym later on.

Types of Gyms in Taipei:

There are some small personal-trainer gyms thrown in here and there but those are usually not for public use.

Government-owned sports centers are usually super-cheap, like 50 TWD for a session or less.

What you need to know:

They’re sponsored by the government and include a bunch of facilities, like swimming pool, basketball, tennis, rock-climbing and what not.

I feel like they have every type of sport besides weight-lifting!

The weight-lifting equipment is usually sub-par, and the cheap entry fee brings in millions of people, mostly students and elderly people.

Trying to work out in a crowded gym where you have to wait in line for 20 minutes for the equipment is pretty much a waste of time.

Generally, I don’t like sports centers because they have so many people and so few weights.

But if you can get in before the crowd, it can be worth it. Or if you want to swim and do other cardio, they’re okay.

For visitors who can’t dedicate a year to a membership, cash gyms are your best option.

Personally, I’m a fan of cash gyms because I don’t like commitments. It’s also easier to walk in, work-out, and leave.

Unfortunately, there aren’t many decent cash-based gyms where you can just pay for each session in Taipei.

It does feel like more are popping up here and there, so hopefully, there will be more options soon.

There’s one in Danshui I used to go to, which is basically a hole in the wall, but it has enough equipment to get some gains.

For visitors, the government sports centers will be your best option, as they’re cheap and don’t require a monthly membership.

There’s another hole in the wall gym on Linsen North Rd that’s open 24 hours and costs 150 NT for a session.

It’s in the basement, kind of ghetto, but it has some good equipment.

I went to this one a few times for a quick workout because it’s near my house.

The equipment is pretty old, similar to the one in Danshui, and it’s very small.

I noticed most trainers use this gym to train their clients, so there are always a lot of people here, which kind of sucks.

Another I heard of Formosa Fitness, a gym that seems to focus on barbells only (Yes!).

I messaged them on Facebook and they said a day-pass is 250 NT which is a bit expensive.

I haven’t checked it out yet, but from the pictures, looks new and decent.

Now I definitely won’t check them out.

Another one I found downtown that looks good is called People Fitness.

I’m not sure about prices but I imagine it’s not much different from the regular cash gyms here.

Just remember, most of the cash-gyms in Taipei, especially downtown, will be crowded to hell during peak hours (6 – 10 PM).

Soulfit is a newer gym that is one of the most convenient to use.

At Soulfit, you don’t have to sign a contract or pay cash, instead, you can use your Easy Card.

P.S. Check out this article on how to add an Easy Card to your phone.

It works much like how the MRT or YouBikes work.

You just tap your Easy Card to the sensor, and the gate will open…

And that’s it. The cool thing is the gym charges your card 1 NT a minute, so an hour or so would cost 60 NT.

You will have to register your card at the counter first, but other than that, the gym is great.

There are two main commercial gyms in Taiwan; World Gym and Fitness Factory.

You can find other smaller chains, but these are the two biggest chain gyms.

With both, you can sign on for a free trial.

To start the trial you need to give a deposit which they’ll refund when the trial expires.

But you need a certain type of debit card.

Basically, it has to have a VISA or MASTERCARD logo on it.

World Gym – for some reason – always has a ton of spinning disco-lights inside, making for a very dizzy experience.

Their equipment is okay; tons of cardio machines, some barbells, and a couple of squat racks.

What I liked about World Gym is some chains have a boxing ring where you can practice sparring and stuff.

Besides that, it’s a bit expensive, and I think their sales reps are overly aggressive.

And that brings us to another commercial gym, Fitness Factory.

Fitness Factory is a more normal commercial gym (no disco lights!) but they have fewer chains, there are only two in Taipei City.

You’ll find one in Danshui a walk up from World Gym.

Personally, I prefer the Fitness Factory, their equipment is decent (more barbells) and it’s less stressful.

I felt the quality of equipment in the Fitness Factory is better than the World Gym.

Either gym will get pretty crowded during peak hours (6 pm – 9 pm) and you’ll have to work in with people if you don’t have much time.

But if you can go earlier, it’s usually dead so you can work out in peace.

Tip: The Fitness Factory in Sanchong is bigger than the one in Danshui, and has more weights. The smallest one is downtown in the Xinyi district.

What Is The Best Gym in Taipei?

In my opinion, the best gym in Taipei is Fitness Factory; their facilities are great, equipment is new, and they have a good amount of power-racks and dumbbells.

It can be annoying to deal with the bureaucracy of chain gyms, but once everything is set up you don’t need to worry about it again.

For visitors, your best bet would be one of the cash-based gyms, Soulfit, or People Fitness.

You don’t have to deal with contracts and the facilities are great.

Can Foreigners Get a Gym Membership?

Back to the subject of foreigners…

Foreigners can get a gym membership at most commercial gyms, but it will be easier if you have an ARC and a local debit card.

You will need to bring a form of ID, either ARC or passport.

Most gyms will have at least one agent that speaks English and can work out the details with you.

Keep in mind the minimum contract is for one year, although they do provide the option to refund a month or so if you can prove you haven’t been in Taiwan.

Usually, you’ll have to sign on for at least a year, so it’s not worth it if you’re visiting for a few months.

I’m not sure if you can use an international credit card.

A workaround for this (which seems to be the solution for most foreigner issues in Taiwan) is to get a local to register for you but in your name.

You both will have to go to the gym but it should work fine, I have done it.

When I first came to Taipei, there were very few gyms available. But now it seems like the industry is growing and more gyms are popping up here and there.

What I don’t like about working out in Taipei is the crowds.

Every gym gets crowded during peak hours, so if you work a normal job and are only free in the evenings, you’ll have to battle it out with armies of people to use the equipment.

Supplements are hard to get too and quite expensive.

Building an impressive physique is a little more challenging in Taiwan but it’s doable.

If you have to choose a commercial gym here, I would go with the Fitness Factory.

I’ve been with them for 2 years and I’m quite happy with their service.

Thanks for taking the time to read this article about gyms in Taipei.

Let me know if you have any questions!