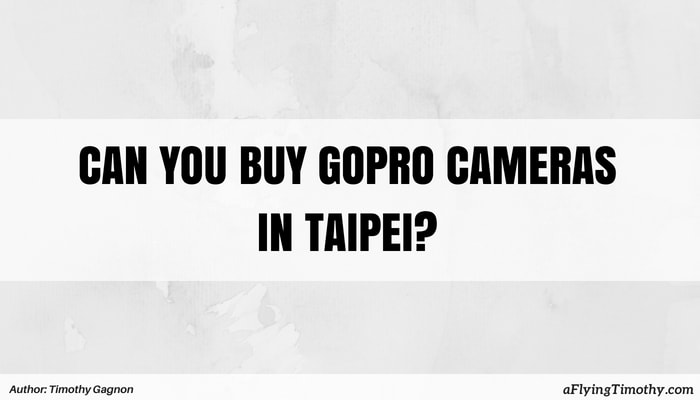 So you’re looking to buy a GoPro in Taiwan to take with you on your adventures.

The problem is you don’t know where to go to look for one, and you’re not sure where you can find the best deal.

You came to the right place.

I recently took to the dive into the world of action cameras, and after visiting several official GoPro re-sellers in Taiwan, I figured out the best place to buy GoPro Cameras.

Since most microchips and motherboards are made in Taiwan, it’s easy to assume most electronics will be cheaper here than in other countries.

Unfortunately… I found the opposite to be true.

Electronics here, especially non-local products, are much more expensive than other countries, especially the U.S and Canada.

So I was quite disappointed when I discovered that all the action camera stores (including official GoPro distributors) charge a ridiculous amount for the cameras.

It’s not unusual to see prices that are 2 times the original value.

I think this is because of the crazy import fees on products to Taiwan.

The import tax applies to basically every non-local product, that’s why some groceries are twice as expensive as in your home country.

And of course sellers will want to make a profit too.

Long story short, you can buy a GoPro in Taiwan, but you’ll won’t find any great deals.

On the other hand, I did manage to save quite a bit on my purchase, and I’ll talk about the steps I took later on.

First of all, is a GoPro camera even worth it? Read my GoPro review and decide for yourself.

Buying a Go Pro in Taiwan:

I was searching for a good deal on a GoPro Hero Black 5 because it’s a good mid-range camera that has all the features I need.

For some reason, every store and website I visited charged over $15,ooo TWD for the camera.

What did I do?

Less now, with the release of the Go Pro 8.

So on Amazon, it’s almost half the price as buying from a local store.

Quick update: I have found Go Pro Hero 5 cameras in stores for about 11.600 TWD.

You can also buy a GoPro at the airport in Taiwan, it’s a little cheaper because there are no taxes on it.

Which is a couple thousand more than what you can find on Amazon.

To save money, I don’t recommend buying Go Pros in Taiwan.

Instead, order it online, from Amazon.

I ordered mine from Amazon, hit the link below to order one too.


I paid about 9,800 TWD for it, that includes shipping and customs tax.

But it still ended up being much cheaper than local sellers.

Yes, it takes longer to arrive, but you can save a lot of money in the long run.

And Amazon does work in Taiwan, at least for most sellers.

Speaking of buying cameras, not long after I grabbed a Go Pro, I bought a Nikon B700 DSLR camera.

Buying a GoPro 7 in Taiwan:

So currently there’s a new Go Pro on the market, Go Pro Hero 7.

Since the release, the previous models dropped in price, so if you were waiting for the cash to grab a Hero Five, now is your chance.

I don’t have one at the moment, but I have seen them in stores.

But… on PC Home (Taiwan’s number one retailer) the price is between 15 to 20 thousand. I found one listing for 15,900 – the absolute cheapest.

The upside of getting it from PC Home is usually they deliver within 24 hours if you live in Taipei City.

See the difference? As mentioned earlier, paying the shipping fee and waiting a couple of weeks is worth the savings.

Generally, I would avoid PC Home, as they tend to drastically over-charge for items.

The same usually goes for camera stores. In my opinion, the best – and the cheapest – way to get a Go Pro in Taiwan, is via Amazon.

Though some electronics are hard to come by in Taiwan, at least for a reasonable price, there is some good news.

Camera accessories, like selfie sticks, tripods, and everything else, are incredibly cheap in Taiwan.

You can find practically any accessory for your GoPro here, not to mention all the accessories for cell phones.

I had good experiences with this camera store in Bade Lu, they have a crap-ton of accessories.

The camera arrived in about a week, which was quicker than the estimated time of arrival on Amazon.

So if you want to save some cash, buy the GoPro from Amazon, or another online seller.

Other electronics will be cheaper ordering from Amazon too.

I also added it to my collection of other equipment.

Thanks for taking the time to read this article about where to buy a GoPro in Taiwan.

So I’ll be taking some videos of Taiwan to show you guys soon!